“ALTAR PICTURE” The Assumption of the Virgin Mary, Anton Schmidt and his workshop. 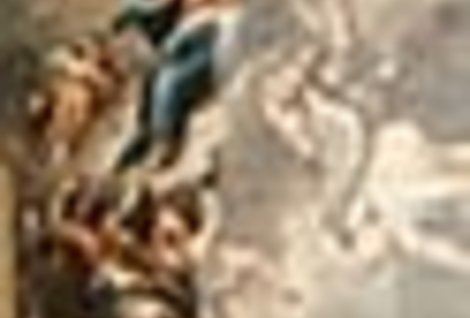 By means of the so-called rescue purchase, SNM – The Historical Museum acquired a monumental baroque picture (690 cm x 360 cm) The Assumption of the Virgin Mary by Anton Schmidt (1706 – 1773). The picture comes from a Roman Catholic parochial church of the Blessed Virgin Mary in Kremnica which was pulled down due to static disruption in 1880. The artwork was created in 1762-3 as a part of a monumental project of a complete late-baroque reconstruction of the church (1757 – 1760 – 1764) where it was on the central altar of the Assumption of the Virgin Mary as a pivotal ideological element of the interior. The design of all the facilities in a unified ideological conception was elaborated by Anton Schmidt and its realization crowned his twenty years of activity in the central Slovakia mining region.

The picture of great dimensions was restored in the Regional Restoration Atelier in Levoča in 2010 – 2012, the final phase of the restoration took place right in the space of Bratislava Castle. Although at first sight it seemed that there will not be any special methodical and restoration riddles, the very size of the artwork caused the restorers troubles. Regarding the commonly established procedure, every single step and operation act had to be solved in terms of how it will be realized on such a large area. It had to be transported by means of rolling it up on a 5 meters long cylinder, a desk in an atelier turned into a wooden floating floor made for this purpose. Exploration and all the interventions on the canvas could have been realized only from a specially constructed platform that was moving over the whole canvas as needed. Another important decision was how to resolve a reinforcement of a pad – of the canvas. The most damaged part of the picture was the bottom, the damage was caused by adverse climatic conditions after the transport (1880) into a Franciscan church in Kremnica. An adequate full-area retouch needed to be done, and it took the final form in the  castle. After the transport – using the same conditions of a cylinder – the altar picture was stretched on a subframe and finalized, which means caulked edges, unified retouches and the final adjustment of surface, in a vertical position on a scaffold right in the Music Hall of Bratislava Castle. The last step was the return of the restored slat from the original frame. The altar picture The Assumption of the Virgin Mary was purposefully purchased into the space of the Music Hall. In the 18th century there was a chapel extending over two floors in this place. There was a canopy altar with the scene of Crucifixion situated in the niche with a stucco drapery and a side altar of the Adoration of the Magi near the wall. Today the Music Hall is decorated by a ceiling painting – Martinčeková´s Symphony – by Ester Šimerová and by a unique organ made to measure by the national enterprise Varhany Krnov in 1975.