Saints Cyril and Methodius Patrons of Europe. The Earliest Evidence of Christianity in Slovakia 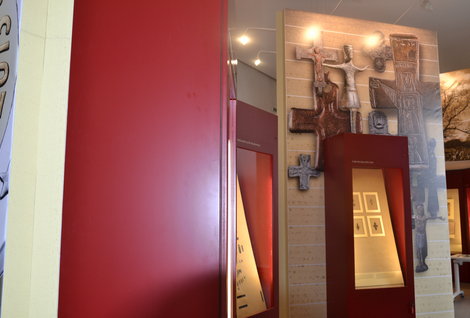 The first Christians between the Danube and the Tatras
At the beginning of the first millennium, the Slovak lands bordered directly on the Roman Empire. Together with its new inhabitants, the first Christians arrived. According to certain writers, Christian soldiers during the wars with the Germanic tribes successfully prayed for the so-called “miraculous rain” depicted on the Marcus Aurelius column on the Piazza Colonna in Rome and which saved them from defeat. The presence of Christians in the centre of the Danube region is also documented by archaeological finds such as small lamps with Christian symbols and objects featuring Christograms or Christian inscriptions. During the fourth to fifth century, a Christian shrine stood on the Devín fortified settlement. In the fifth century A.D., the Slavs came from north-eastern Europe to the central reaches of the Danube. A new power elite was formed as part of their social development. Charlemagne’s incursions against the Avars at the end of the eighth century opened the way to the Christianisation of all the lands. The Avars adopted Christianity, but shortly afterwards disappeared from history. After 800, missionaries from northern Italy, the Frankish lands and Byzantium began their activities among the Slavs. Two principalities were founded in the central Danube region: Moravia (the region of Moravia, the eastern part of the Czech Republic) and Nitra (western Slovakia), and a new stage in the expansion of Christianity began. In 828, the archbishop of Salzburg, Adalram, consecrated the church in Nitra, the centre of the Principality of Nitra. Three years later, the bishop of Passau, Reginhar, “baptised all Moravians”, i.e. probably all the members of the royal caste. The conversion was not easy; pagan customs were deeply rooted in the Slav population. The progress of Christianity was also reflected in burial rites (ceasing to leave token gifts in graves), the construction of churches, as well as in material culture: pendants in the shape of crosses appeared, along with belt ornaments decorated with the motif of a cross or Christian symbols, items forged in the shape of books, and very occasionally bronze bells and so on. Slovakia In 2013, the Slovak Republic is celebrating two important jubilees: the twentieth anniversary of the foundation of an independent state, and the 1150th anniversary of the arrival of the Byzantine missionaries Constantine-Cyril and Methodius on its lands (Great Moravia). These two natives of the Greek city of Thessalonica - the patrons of Europe – are venerated in an unprecedented way in modern-day Slovakia. A link to their spiritual heritage is even mentioned in the preamble to the constitution of the Slovak Republic and is depicted in the state symbol in the shape of a double-cross on three hills. Two new Slovak universities, many grammar schools and other cultural institutions bear the names of the brothers from Thessalonica, Saints Cyril and Methodius. Saints Cyril and Methodius have become the subject of numerous works of art of a historical and religious nature; many churches have been consecrated to them, both of the Latin and Byzantine rites. The Slovak Republic’s borders are the Danube to the south and the northernmost arc of the Carpathians to the north. It has a surface area of 49,034 km2. Ethnic groups about whom we have no information lived in Slovakia until the beginning of the Common Era. After the infiltration of the Romans into the central reaches of the Danube events taking place in the Slovak lands entered the historical record thanks to ancient writers. We can thank the Romans for the first iconographic depiction concerning the territory of Slovakia: scenes on the Marcus Aurelius column in Rome. From the fifth century onwards, the country became the homeland of the ancestors of the Slovak nation. In the ninth century, most of the land was part of Great Moravia. Its development was influenced by the surrounding area, in particular as concerns the spread of Christianity. In 880, Methodius became the archbishop of Moravia and a bishopric was founded in Nitra, led by the monk Wiching, an advocate of the Latin rite. The followers of Constantine and Methodius have left us testimonies of these events. It was the period in which the Slovak nation was born.

The name of Great Moravia
(Megále Morabia, Moravia Magna) was introduced in the middle of the tenth century by the Byzantine emperor Constantine Porfyrogenetos in his work “On the Management of the Empire”. After the destruction of the Avar Khanate by Charlemagne at the end of the eighth century, there was a flowering of Slav principalities in the whole central Danube region. Gradually, two mighty principalities crystallised: Moravia (present-day Moravia, the eastern part of the Czech Republic) and Nitra (the present-day western part of Slovakia). Its original date of foundation is considered to be 883, when the Moravian prince Mojmír defeated the Nitra prince Pribina and joined Nitra with Moravia. The empire gradually began to flourish economically, militarily and spiritually. In the 880s, under the rule of Svätopluk, the empire attained the height of its greatest expansion and importance. It occupied a widespread territory from the eastern border of the Frankish empire up to the Tisza and from southern Poland up to Bulgaria. It became an important player on the European political scene and a serious competitor for its contemporary hegemonies, the Frankish empire and Byzantium. The Work of Saints Cyril and Methodius Saints Cyril and Methodius, who arrived in Great Moravia in 863 following an invitation from prince Rastislav, were responsible not only for consolidating and expanding Christianity from the turn of the ninth century, but also for introducing a new writing system, the Glagolitic script, translating various legal and liturgical texts from Greek as well as for new writings in the Slavonic language. Thanks to their activity, Pope Hadrian II recognised the Slavonic language as an additional liturgical language alongside Latin, Greek and Hebrew, a move that was unprecedented at that time. The essence of Cyril and Methodius’ mission lay in building and strengthening the organisation of the Church itself. Many of their opinions, however, were logically in doctrinal conflict with the Eastern Frankish – Latin district to which Nitra belonged historically. The status of the Byzantine mission was consolidated once the brother defended their approach before Pope Hadrian II in Rome. In 880, pope John VIII declared Great Moravia as a fief of the Holy See in his pontifical letter Industriae tuae. After 885 (the death of Methodius), his followers were forced to leave Great Moravia.

We have information on the life and activities of the brothers from Thessalonica thanks to the accounts written by their followers which have mainly been preserved as later transcriptions, and thanks to archaeological excavations in southern Moravia and western Slovakia. The main literary source is Život Konštantína [The Life of Constantine], the longest prose text from the Great Moravia school of literature dating from 873 to 870, which was produced on the occasion of the funeral or the first anniversary of the death of St Cyril. Its author is probably St Clement of Ohrid. Around fifty manuscript copies have survived, the oldest dating from the fifteenth century. Further sources are Život sv. Metoda [The Life of St Methodius] (whose author is St Gorazd, a pupil of Saints Cyril and Methodius, most probably the first saint from the Slovak lands), Vita Italica by Gauderic, the bishop of Velletri, written in Latin, and Žitie bulharské [Bulgarian Life] (around 1080) by Theophylact, archbishop of Ohrid. As well as these sources, papal letters confirming the work of the apostles have also been preserved, including for example five letters from Popes Hadrian II, John VIII and Stephen V from the ninth century. The western European world, holding on to orthodoxy of the Latin language and ancient culture, was reluctant to accept the new script or the translation of the Holy Bible and liturgical books into the language of the Slavs. The apostles had to defend the Slavonic script, language and liturgy in Constantinople, Venice and Rome. Constantine and Methodius – Apostles of the Slavs First third of the 9th century. The brothers Constantine and Methodius are born into the family of a high-ranking military official, Leo, in the town of Thessalonica. 842/843 Constantine studied at a specialist school in Constantinople. around 850 Methodius decided to become a monk and left for a monastery, probably on Olympus. 860 – 861 Participation of the brothers in a diplomatic mission to Chazar. On the way, they stopped in Chersonesus in the Crimea, where they found the remains of St Clement. 863 Emperor Michael III (840 – 867, emperor from 842) entrusted them with the leadership of a mission to Great Moravia. They probably began their missionary activities in the country that very year. On the way, they composed the first Slavonic alphabet in history. 867 Constantine and Methodius left Great Moravia with a group of pupils and travelled via Mosapurc (in present-day Hungary) to Venice, where they wanted to board a ship to take them to Byzantium. It was there that an invitation from Pope Nicholas I awaited them. At Christmas of the same year, the new Pope Hadrian II gave permission for sacred books to be used in the Slavonic language and placed them on the altar in the Basilica of Santa Maria Maggiore. On 14th February 869 during a stay in Rome, Constantine died and was buried in the Church of San Clemente in Rome. Before his death, he entered a monastery and adopted the name of Cyril. The same year, Methodius came to Pannonia as a papal legate. At the request of Koceľ, he returned to Rome in order for the Pope to ordain him a bishop. In 870 Pope Hadrian II ordained Methodius archbishop of Great Moravia and Pannonia. On the way, he was captured by Bavarian bishops who accused him of spreading heresy and imprisoned him in a monastery. 873 Following the intervention of Pope John VIII, Methodius was released and returned to Great Moravia. 880 On the invitation of John VIII, Methodius travelled to Rome. In his papal bull, Industriae tuae, the Pope permitted Slav worship and appointed Wiching as bishop in Nitra. 881 Methodius travelled to Constantinople, where he reported the results of his missionary work in Great Moravia. 6th April 885 Death of Methodius. He was buried in a certain Great Moravian church which remains unidentified up to this day. He named Gorazda as his successor, probably a cleric of local origin.