A vestment press is a closable furniture – a cabinet similar to a chest of drawers or a secretary – with lockable doors to store liturgical robes (vestments) and items. Liturgical items are kept in the sacristy, a side temple room where the priest and his assistants prepare to celebrate worship. The Council of Trent (held between 1545 and 1563) issued a guidance note on sacristy equipment. Under the document, a sacristy/vestry should include a table; a knocker; a text of prayer before and after Mass; a cross; a picture of a bishop and a pope; a washbasin with a towel for the priest to wash hands before the liturgy; and a vestment press.

A two-level tabernacle vestment press with two side cabinets. There is a rustic yet refined painting decorating the bottom of the vestment press. The panel paintings with angels on the lower cabinet doors and the superstructure make the rather ordinary home joiner's work artistically impressive. With their secondary use being proved by the restoration research, the panel paintings are adapted to the design of the chest-of-drawer middle part. They probably come from the vanished altar of Čimhová (?). The two angels painted on the lower cabinet wing doors carry fiery swords in their right hands and the standards in their left hands. The standards also act as a banderol, an inscription tape with a Biblical text in Latin on it (here and there unreadable). The left door inscription tape reads a text from The Gospel according to Luke (11, 21): Cum fortis armatus custodit atrium suum, in pace sunt ea, quae possidet ["When a strong man, fully armed, guards his own palace, his goods are safe"]. The right door inscription tape reads a text from the Exodus Book (23, 20–23), including the source link: NEC CONTEMNEDEUM PUTES: QUIA NON DIMITTET CUM PECCAVERIS: EXOD: XXIII. [... "Do not rebel against him; he will not forgive your rebellion"]. Presumably, the inscription is just a snippet or maybe a follow-up to a more coherent text preceding it, which might have been inscribed on the no longer preserved door overlapping the chest-of-drawer middle part of the vestment press.

In the stepped upper part, the tabernacle cabinet has doors painted with angels holding burning candles in their left hands. In their right hands, they carry liturgical items, incense and a boat, traditionally kept in the upper part of the vestment press. The cabinet is painted inside; on the inside of the doors and the backboard, there is a painting evoking the heavenly sky, with gilded stars against a blue background along with Christ's monogram IHS encircled with rays of glory. The place of the painting is where the monstrance is put. The side cabinets are painted inside, too. The inner board paintings were uncovered in the process of restoration.

According to the Christian iconography, angels depicted as young men with wings, fiery swords, candles and other attributes are the messengers of God ready to protect all of God from evil and to herald the Doomsday. In addition, the angels on the vestment press have a symbolic role as guardians of the sacred liturgical items kept inside. As the vestment press was in bad condition when the SNM Museum of History acquired it in its collections in 2008, it was completely restored. 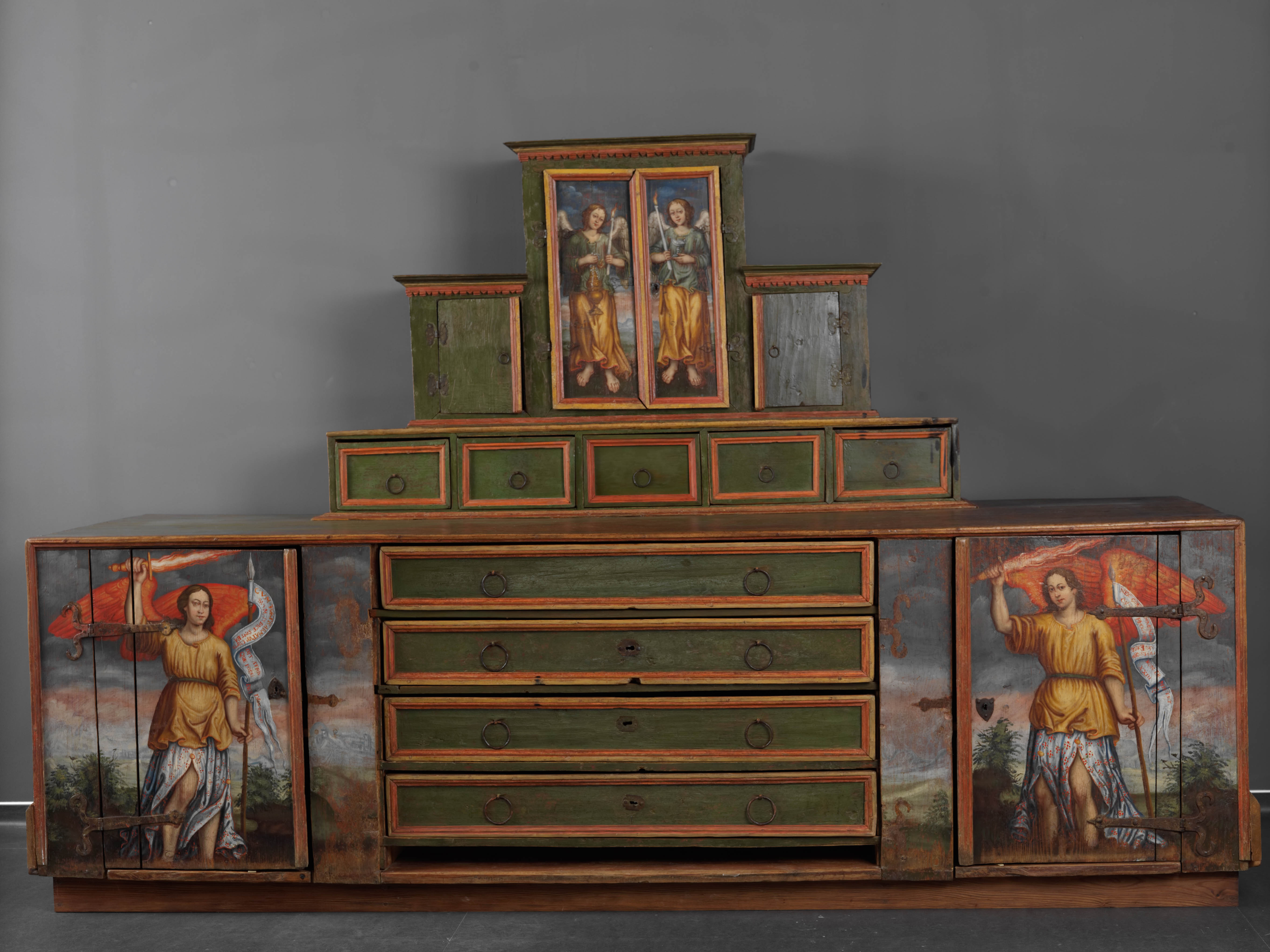 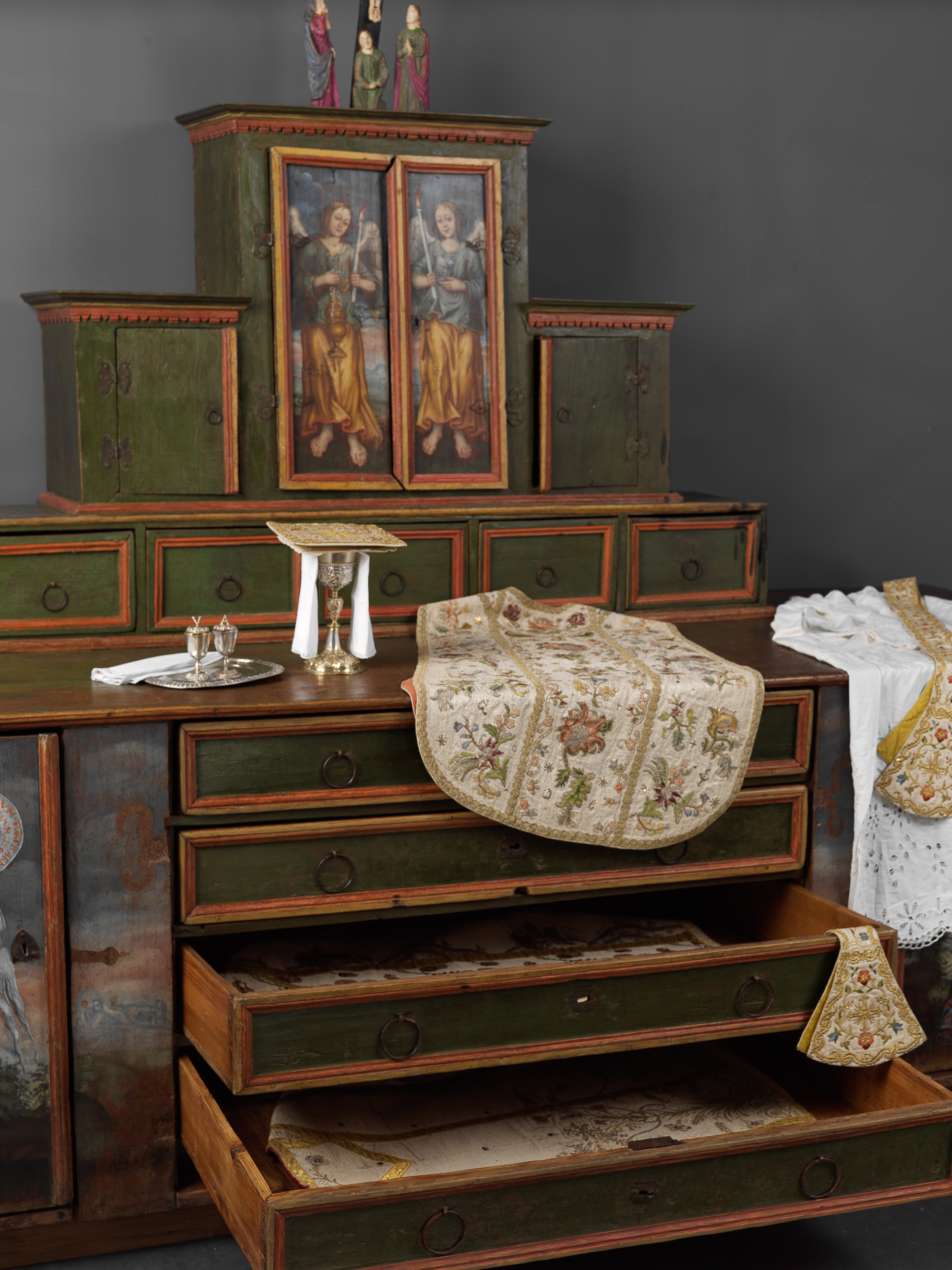 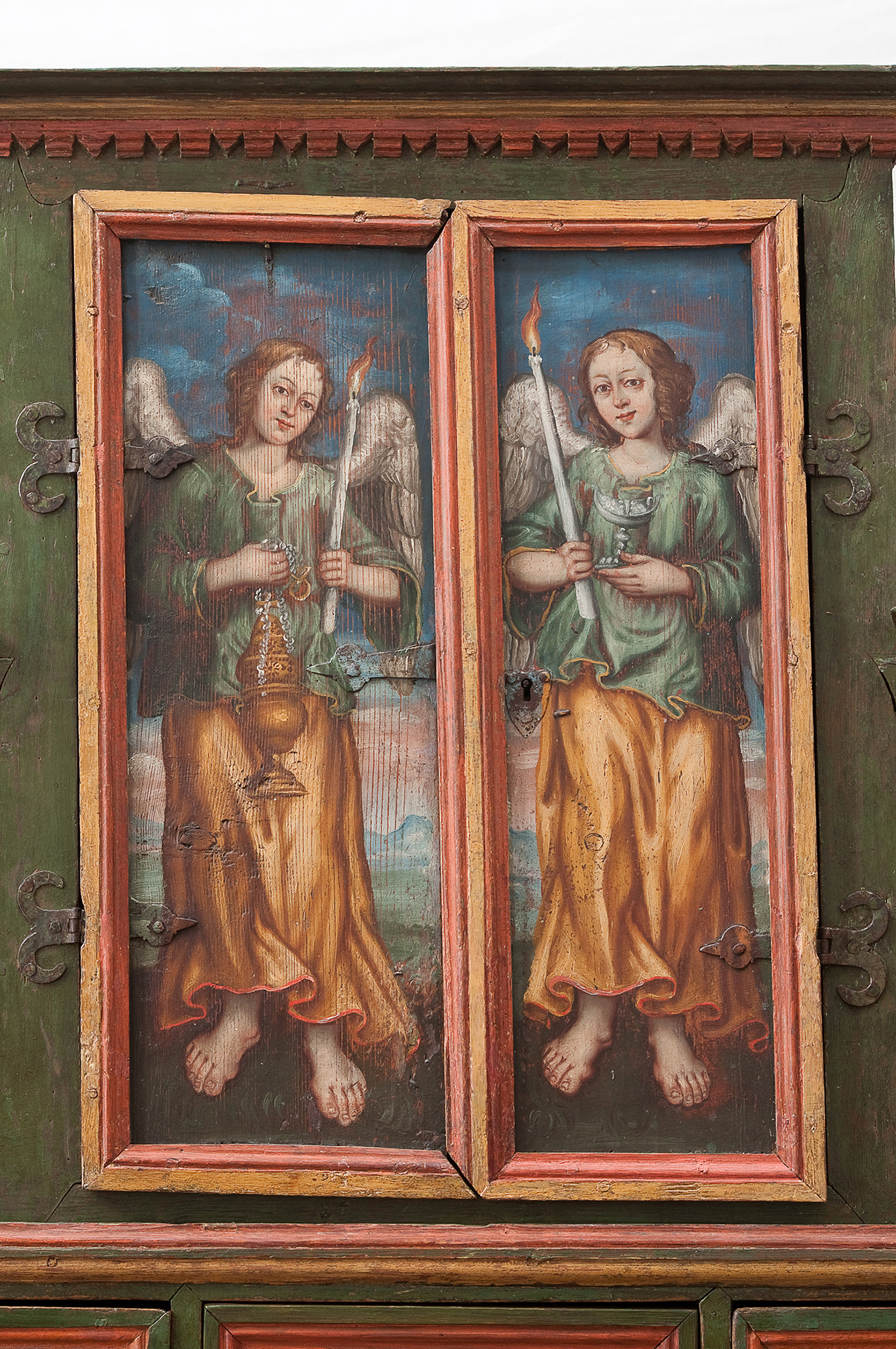