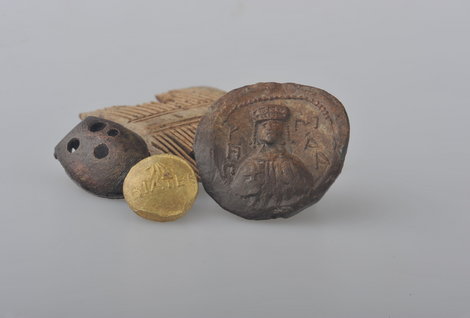 Bratislava Castle as a witness of rich human past is also the symbol of Bratislava and Slovakia, affirmed by its location on reverse of Slovak eurocoins. The strategic location of the castle hill first noticed people of boleráz culture about four and a half millennia ago. They left us broad picture of their settlement, with diverse objects, mostly ceramics. Notable is the clay foot discovered in northern terrace of the castle areal. Earlier research suggested a Celtic presence on site (Biatec coins, pottery) but the breakthrough came with recent discoveries. Archaeologists from Bratislava Municipal Institute of Memorials Protection found in the courtyard and northern terrace remains of buildings with Roman character, with pavements and plasters. They were used by local Celtic elite, confirming the Bratislava Celtic oppidum. Unique discoveries were the golden Biatec, and historically first Nonnoses, as well as silver coins in the floor of one of the objects. A rare finding is a bell of Roman origin from the northern terrace. Systematic archaeological research on the castle site began in the 1950s together with the reconstruction of the castle. Professor Alfred Piffl led the initial survey in the years 1953–55. He focused on architectural research for future castle restoration. Research in the years 1958-68 was led by Belo Polla and Tatiana Štefanovičová, later with Andrej Fiala. This research defined castle areal as the Great Moravian settlement and seat of the first Árpáds. The most significant findings were remnants of the church buildings, e.g. the Great Moravian basilica with adjacent churchyard on the eastern terrace and abundant material evidence, including jewellery. Later research added reconstruction of the Bratislava Castle in the Middle Ages and modern times. The most recent archaeological research by the Bratislava Municipal Institute of Memorials Protection began in 2008 (by Branislav Lesák, Margaréta Musilová, Jozef Kováč, Branislav Resutík, Andrej Vrtel). May 28, 2011 will mark the sad anniversary, 200 years since the fire that destroyed the sumptuous Baroque reconstruction of the Maria Theresa era and began 150 years of its decline.